How can directors make the best use of veteran staffers during camp staff training?

Home Articles Ask Avi Anything How can directors make the best use of veteran staffers during camp staff training?

How can directors make the best use of veteran staffers during camp staff training?

For the first edition of “Ask Avi Anything”, I asked the members of the Summer Camp Professionals Facebook group to suggest some questions. (If you’re not already a member of this group, I highly recommend it. Join here.)

This question takes me back to the days when I was a Junior Counselor at Camp Hilbert in Richmond, VA. One of the most memorable sessions during staff orientation was titled “Deviating From The Norm” and was given by a counselor named David Cohen. David was, as I said, a counselor, not a head counselor or other administrator (yet). The heads of the camp had identified David as someone who was good at improvising and changing things up to ensure a great time for his campers, and asked him to give that session.

The basic steps in planning a staff training session are:

But by adding a few steps, we take our training to a whole new level:

In addition to the veteran staff members who are called upon to deliver or moderate sessions, others can be invited in advance to participate by role playing situations that are being discussed, or sharing their own experiences that illustrate what is being taught.

There are several benefits in utilizing veteran staff other than directors and head counselors:

I have personally implemented all of the suggestions that I have shared in this article so far. But as I was putting my words together, a third approach occurred to me, and while I have not yet had the opportunity to try it, I believe it beats the others hands-down, and can absolutely supercharge any camp’s staff training.

Anyone who attends the ACA or similar conferences has seen the “Call for Presentations” that goes out a few months in advance, inviting participants to propose topics for sessions they can give at the conference. Why not approach staff training in the same way? A few months before staff orientation, invite the entire staff to propose subjects that they would like to present at orientation.

This approach can offer benefits that go way beyond the three I outlined above. A few that come to mind:

While I believe that my suggestions are sure-fire ways to make the best use of veteran staffers during camp staff training, there’s one essential piece that can make or break the effectiveness of any of them: The director’s participation.

I have seen directors introduce a speaker, building him/her up as the best thing since bug juice, and then slip out the back door as the session begins to attend to more important things. In some cases, the director doesn’t even show up to introduce the session, trusting that the staff member “needs no introduction” and is perfectly capable of starting and running the session on his/her own.

But the message this sends to the rest of the staff is that the subject is unimportant, as if the line of thinking was, “If it was important, I’d be giving the session myself. But it’s not, so I’m not bothering to stick around.”

Even when multiple breakout sessions are happening at once, someone representing the camp’s leadership should attend each one and act in this manner.

We always tell our staff that they need to lead their campers by example. As directors, actively participating in training sessions is an excellent way to personify the idea of leading by example.

Avi Frier is the Chief Eventertainer at EVENTertainment, the company that brings you SummerCampEntertainment.com. Avi has worked in the fields of entertainment and youth/camp programming for more than 30 years.

What are you trying to accomplish?

Browse our services by category...

Events that bring bunks together.

Who says you can't exercise your brain at camp?

Give us a dark room, we'll make it glow!

Not limited to indoors, but it's where they work best!

Best when played outdoors or in a large gym

Treat your staff to something special just for them!

Build and strengthen the teams that power your camp! 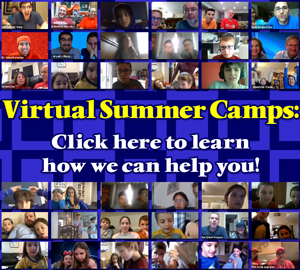 Give your campers something awesome to write home about! Contact Us!